Exploration Station…a children’s museum opened its doors on July 28, 1990 through the efforts of a core of dedicated and inspired volunteers. Late in 1987, Marilyn O’Flaherty, a retired Bradley art teacher, presented the concept of a hands-on exploration and discovery museum for children to the Bourbonnais Township Park District. The Park District adopted the concept and soon began work on developing a children’s museum under the leadership of Mrs. O’Flaherty.

A Board of Trustees was created from civic, business, municipal and educational leadership that would consult and assist in the creation of a mini-museum. Through the combined efforts of trustees and other area volunteers, a small traveling gallery was created. The traveling gallery brought hands-on, interactive museum experiences to schools and libraries where such opportunities were not affordable or available.

The popularity of the traveling gallery was overwhelming upon its introduction to the community. It was time to find an affordable home for the children’s museum. Goals and objectives were updated and redefined, exhibit specifics determined and the Park District hired the first full-time museum employee, Mrs. O’Flaherty. A search began for a facility. A small, older building that needed a lot of work was found to be promising. With the community volunteer help, a lot of donated materials and months of hard labor, the 2300 square foot building was made suitable and the doors were opened to the public on a 90-degre day in late July. Featured was one exhibit – a two-story, six-room model of a medieval castle. Then throughout the facility visitors found hands-on items such as tools, musical instruments and wooden shoes. There were also optical instruments from the Netherlands, clothing jewelry from the Maasal of Kenya, part of a heat shield from a NASA space vehicle; and many natural science offerings, such as rocks, fossils, skulls, and skins. More than 1400 people visited the children’s museum that weekend, even without a working air conditioning unit in the building. And they returned. Twenty-two thousand person’s crossed the threshold the first year.

In October 1997, a 10,000 square foot facility to serve as a permanent home for the Exploration Station was opened on the Perry Farm Park. Since the opening of the children’s museum in 1990, over 400,000 visitors have crossed the threshold. While the children’s museum serves a 65-mile radius, visitors from more than 45 states and 25 foreign countries have registered in the guest book. 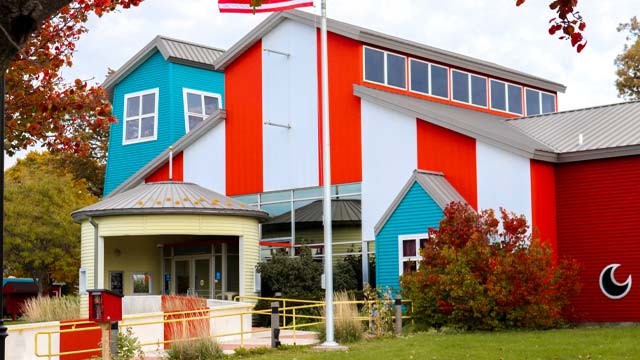